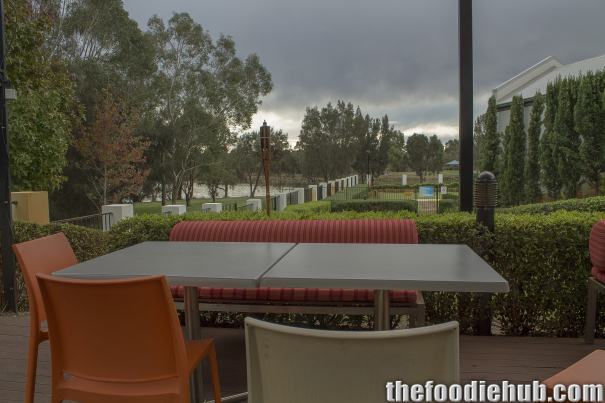 In a beautiful setting beside the Swan River in Ascot at the base of the Assured Apartments complex is 150 East Riverside Bar and Restaurant. There has been quite some hype of late pertaining to the venue with an increasing number of Foodies experiencing it so it was interesting chatting with the guys about what they feel sets them ahead of the competition. Asked what their signature dish is at the moment, Head Chef Dan Child explained their White & Dark Chocolate Venison (pictured) was a standout. “We use a white chocolate and blend it with a carrot purée , a dark chocolate jus  with silver beet and pickeld beetroot. We introduced this dish as part of our new Autumn menu and we keep our menus seasonal. We  set them to keep up with produce. We like to have a focus on sustainably sourced produce and a significant number of our suppliers are from the Margaret River region.”

Dan started his culinary career in NSW. Commencing work on a cruise ship based at Coffs Harbour he worked to gain experience in the kitchen before making a move up to the Gold Coast. It is there that he worked at Couran Cove Island Resort which had five restaurants and 80 staff. It has a mix of restaurants including fine dining, Dan worked as an Executive Sous Chef running all outlets. He was there for five years before moving over to WA two years ago.

Gavin also hails from the Eastern seaboard. From Melbourne, he studied business and hospitality. He cut his teeth working in a restaurant/cafe environment and moved on to managing corporate suites at the MCG which included marquees that offered a fine dining experience.  He then also gravitated towards the warmth of QLD and worked for a restaurant in the Whitsundays for one year. Typically they would do 300 covers a night. Four years ago he crossed the Nullabor to come over to WA. He worked in banqueting at a members yacht club before becoming the Bar and Functions Manager at what is now Crown Perth. He ran that gig for a year and a half, essentially managing banquets which held 1200-1500 people. Amongst some memorable names and banquets he managed were CHOGM, Richard Branson & James Packer.

They describe their menu as specialised. Modern Australian with a French twist. They use a lot of powders and gels. Dan explained how there is a lot of technique to dishes. Take the Porterhouse steak. He says they do not follow suit with tradition in cooking terms, they roll it out after cutting it trim and then roll it up to cook.

Their top dishes are the Venison, it is cooked medium rare/rare & the Veal which essentially is a braised beef rib. They also take pride in their white truffle powder. Its flavour lingers, it’s substance does not. When it touches your palate it disintegrates, leaving a rich truffle taste. The truffle powder is made from white truffle oil which is produced into powder. The bottom line here is the menu is for a punter that wants to try something different cooked to a high standard.

The crowd attracted here – their market- is time specific. During the weekdays, they have a lot of Corporates & FIFO’s through whereas dinners throughout the week and weekend see it as more of a destination restaurant. Given its location on Great Eastern Highway, they do not benefit from a lot of walk in traffic however Gavin explains how they compensate for that through servicing. “We treat all our customers like VIP’s. I lead by example and hold a high standard for all our staff who are a great bunch and we believe treat all our customers with the correct service orientated focus.”

Dan echos this high standard when passionately describing the correct way he cooks octopus. “We do it correctly. There are many chefs in Perth that cook Octopus with bi carb soda which is a short cut and incorrect. We use a triple blenching method. We slow cook over two and a half hours. We put the tentacles in boiling water and the muscles are tense. The boiling water relaxes them, when we take them out they tense up again. We use salt water and bay leaves during the cooking process. We replicate this  twice over and then the octopus is tender and doesn’t get served on the plate tasting like rubber.”

It is passion like this that flags a visit to 150 East for dinner sometime soon. Address and phone number below.  Item dish names are on the picture when you click to enlarge it.